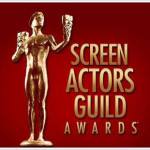 The Screen Actors Guild held its 19th annual SAG Awards ceremony tonight. Some actors and filmmakers take greater pride in this event than they do in other awards shows because their peers in the acting community vote on the winners. Argo took home one of the more coveted awards of the night with the “Best Cast in a Motion Picture” award.

Other films and actors on the SAG Award Winners List include: