An Object of Beauty Book Review 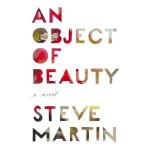 An Object Of Beauty is a novel about money, a novel in which Lacey Yaeger, in her 20’s, learns that “an object of beauty” is much more valuable as “an object of value.” Narrated from the perspective of Lacey’s friend, Daniel Franks, an art reviewer who really doesn’t care about money at all (although he cares about analyzing and interpreting artwork), we learn from Daniel about Lacey, who’s unlike any woman I’ve ever encountered. Lacey is more shark than woman, smelling the blood of wealth and status and moving like sea-life from Jaws straight towards it, along the way calculating how best to “attack” her unsuspecting victims.

Lacey is unusual because she shows absolutely no signs of nurture or romance. She uses sex as recreation or to “better” herself, and while reading An Object Of

Beauty I couldn’t help but wonder why her intelligent efforts in the world of art-selling necessarily had to preclude or negate womanly warmth. Have you ever met an entirely masculine woman who appears feminine, a ruse, a woman disguised as a feminine social apertif but really just a hard-driven, strange, inhuman force? We fear that if stripped naked of even her skin Lacey would turn out to be an android, and not the one who wanted to actually have the memories that were implanted in her in the movie Bladerunner, either!

Although Steve Martin may or may not know a lot about women, he certainly does know about the art scene (and its moneyed particulars) and this book is replete with illustrations of paintings talked about in his novel, which is not at all typical. I appreciated this detailed touch (even though having a degree in arts myself I already knew most of the paintings – but not all). Martin comes from a self-originating art-form, comedy, which is not as easily turned into sheckles or commodities (hard to put a frame around a thought!), but I loved the constant bounce of how paintings, drawings and prints were lauded for their intrinsic design, coloring, content and beauty and then instantly turned into products! Did the sale of a major artist’s work now make a lesser work of his more saleable? Were politics, as trading agents, between countries involved? (Lacey travels to Russia to trade Russian art works for American pieces our country has now deemed important.) Does beauty and energy (especially in female form) have an effect on sales? Is it all right to capitalize on one’s boss’s possible criminality? Given these questions, this is a philosophical book just as much as the novel as which it’s touted.

Literature is about self-revelation (you feel the pain as you write it – as a poet and writer myself, I know) and even deeper revelations about others (families, lovers and friends) that society would not normally disclose (as in the plays of Tennessee Williams). Writing can be anything – wit, banter, character stereotypes, action. Although Steve Martin leads us to a world that most of us have never seen, he doesn’t unlock the souls of its personalities – these people lack tragedy, mirth, and real involvement with each other – people are held at arms’ length with the artworks standing robustly between them. Perhaps the people he’s observed actually have real qualities, but he’s not telling us about them!

The Girl Who Fell From The Sky book review