— Melissa Muldoon, Author of Dreaming Sophia: Guest Post – On top of the world, on top of Florence’s Duomo!

On top of the world, on top of Florence’s Duomo! 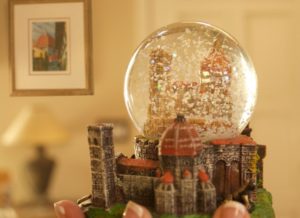 Florence’s cathedral—Santa Maria del Fiori, or simply il Duomo, as it is known to the Florentines, is a fantastic piece of architecture. Every time I visit Florence its beauty strikes me. The cathedral was built in the Gothic style, and the facade of the building displays multi-colored marble panels of green, rose and white. In front of the Duomo stands the octagonal Baptistery, one of the oldest buildings in the city, where Dante himself was baptized! The baptistry also features the bronze door designed by Ghiberti. Once Michelangelo, in complete admiration of the panels constructed in bronze called them the “Gates of Paradise”. He considered them so lovely that he said they could easily have graced the doors to heaven.

Florence’s Duomo was started in 1296 by Arnolfo di Cambio. However, it remained incomplete for more than two hundred years. With the demise of poor Arnolfo and the onset of the Black Death, work ground to a halt. Giotto stepped in and helped to finish off the basilica and the bell tower. But no one, not even Giotto or the architectural luminary Andrea Pisano, had a viable solution to top it off. 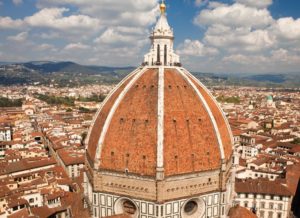 The Florentines scratched their heads and furrowed their brows. To Medieval men, it seemed an

impossible feat to create a dome that would span the space above the church without the use of flying buttresses. The Florentines turned up their noses at such ugly reinforcements, deeming them secondhand solutions. Instead, they wanted a free-standing dome, with pleasing lines and classical proportions. So instead of a “quick fix,” Florence held out for a better plan. Meanwhile, the cathedral remained uncapped, and rainwater poured in from the skies. 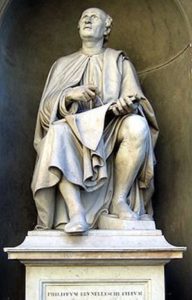 It was Filippo Brunelleschi, the hot-tempered Florentine goldsmith, who came up a plan to build a sustainable dome. Standing before the Pantheon in Rome, he had an “Aha!” moment. While gazing at the coffered ceiling constructed by the Romans, he found the structural formula he needed. Dusting off an ancient concept, he improved upon the idea. Instead of a single, circular shell of concrete, he created double-nesting, egg-shaped domes. To finish it off, he used lightweight Florentine bricks. It was the perfect solution to reduce stress and ensure the dome would stand the test of time.

If you are truly adventurous, you can climb to the top of Brunelleschi’s cupola. But, there is no elevator to go to the top. Instead, the only means to reach the pinnacle is to climb four hundred and seventy-three steps that spiral upwards, through the two concrete shells of the dome. Around and around you go passing by Vasari’s fresco of “The Last Judgement” that displays sinners being roasted alive and whipped by the devil’s minions, while the devoted are welcomed into paradise.

When you arrive at the top of the cathedral, you are treated to an incredible view of the city. Una vista mozzafiato—breathtaking! Below you will see the Arno that flows on the western side of the city and in the distance toward the north, you will see Fiesole. Spend as much time as you like at the top, but when you descend back down to the ground don’t forget to take a peek into the church’s crypt. There you will find Brunelleschi’s final resting place. He sleeps there in the Duomo for all of eternity looking up into the dome he built brick by brick. That was quite an honor as before Brunelleschi’s time, few saints, and fewer common men were allowed to be interned in the Duomo’s crypt. But, Brunelleschi’s impressive dome succeeded in capturing the imagination and respect of the Florentine people, and it was the least they could do to honor his artistic genius.
[youtube https://www.youtube.com/watch?v=tADnkyEMcmM]
“Dreaming Sophia” is a new novel about Italy by Melissa Muldoon. It is a fictional story about Italy and also weaves together many strands of Italian culture in a mixture of fantasy, romance, art, and history.

It is also the story of a young American painter who is named after La Loren, the legendary movie actress. At the start of the novel, she is a woman 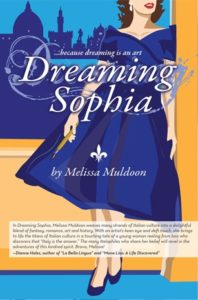 blindsided by fate and must come to terms with a devastating tragedy. But, Dreaming Sophia is also a joyful story, at times even funny and whimsical. It ultimately tells how Sophia emerges from a very dark place by tapping into her creative, imaginative powers. In Italian, a person who daydreams is said to sognare ad occhi aperti—to dream with eyes open. Through dreams, Sophia meets and talks to famous Italian personalities from past eras—Eleonora de’ Medici, Michelangelo, Leonardo, Simonetta Vespucci, Lucrezia Borgia, Garibaldi and even the great Brunelleschi himself, the architect of Florence’s Cupola.

Dreaming Sophia is now available on Amazon in print and e-pub versions. The e-pub book has links to art, music and film clips mentioned in the book so you can experience the book visually and aurally. You can also find Dreaming Sophia on Facebook, Pinterest and the web at DreamingSophiaBook.com where the author will be posting more stories about Florence, Italy, and art.

As a student, Melissa lived in Florence with an Italian family. She studied art history and painting and took beginner Italian classes. When she 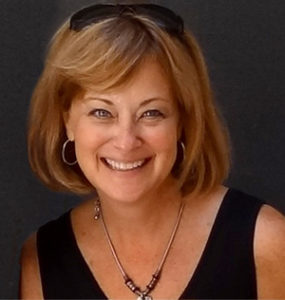 returned home, she threw away her Italian dictionary, assuming she’d never need it again but after launching a successful design career and starting a family, she realized something was missing in her life. That “thing” was the connection she had made with Italy and the friends who live there. Living in Florence was indeed a life-changing event! Wanting to reconnect with Italy, she decided to start learning the language again from scratch. As if indeed possessed by an Italian muse, she bought a new Italian dictionary and began her journey to fluency-a path that has led her back to Italy many times and enriched her life in countless ways.

Now, many dictionaries and grammar books later, she dedicates her time to promoting Italian language studies, further travels in Italy, and sharing her stories and insights about Italy with others. When Melissa is not traveling in Italy, she lives in the San Francisco Bay Area. She is married and has three boys and two beagles.

Connect with the Author:

The Psychology Of Reward In Children

The Dybbuk’s Mirror by Alisse Lee Goldenberg – a Cover Reaveal