Learning what’s right to in in various circumstances is what Zoey’s Zany Life by Mikayla Lowery is all about.  The main character Zoey will learn more lessons than she can shake a stick at.  Zoey learns in her sixth grade year along with her twin Zelena.  Zoey learns what it means to be a sister and a friend. 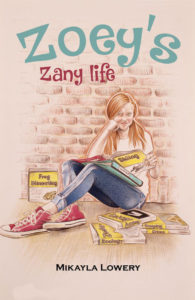 Zoey’s Zany Life gives readers thanks to Mikayla a way to see things from others perspective, for example when Ms. Sunshine filled in with Zoey and her group to sell brownies for the Star Scouts.  Zoey learns many things and how to handle the situations she finds herself in school and at home.  All the characters adult and kid learn about themselves.

Zoey’s Zany Life is a great juvenile book for girls and boys to learn about friendship, trust and finding out about themselves in many ways.  This is a story that would make a good literature, reading or language arts project to learn proper social skills and communication skills and maybe even a few study skills as well thanks to Zoey.  Zoey is a character that may be a lot of girls could emulate within their own lives.  Comparisons could be made in the characters in the book and students in the real world classrooms.
Zoey Song cannot catch a break from quirky mishaps and hilarious accidents. This redhead is as warm hearted as they come, but mischief follows her everywhere. With a little miss perfect twin sister and friends who seem to have everything they want, Zoey has a difficult time finding confidence and a place in the world. Get lost in Zoey’s zany stream of consciousness. Don’t worry. She says it out loud.

Mikayla Grace Lowery was born in China on August 23rd, 2005 in a large city called Chong Qing. Someone took her to an orphanage where she stayed for a year. She was blessed beyond measure to be adopted by Scott and Jenny Lowery of Cartersville, Georgia, one month after her first birthday.
Mikayla is now eleven and still lives in Georgia, bringing joy to everyone she knows. She started writing short stories when she was nine and created the character of Zoey Song at age ten. Thus Zoey’s zany life was born.
Charlie’s Port publishes Mikayla’s monthly blog that explores the art of writing from a child’s viewpoint. Charlie’s Port is developing the Zany Zoey series and has commissioned her to write a picture book about the eating habits of birds

Maybe He Just Likes You by Barbara Dee