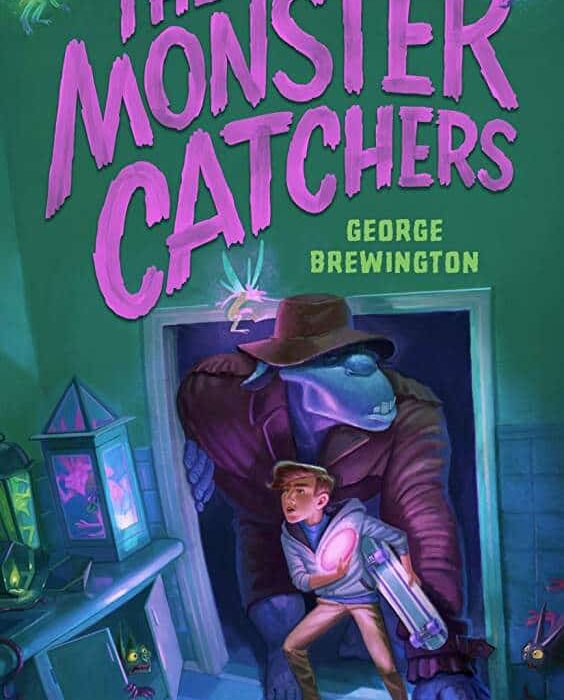 George Brewington   Illustrated by: David Miles
2019
ISBN:  978-1-250-16578-7  (hardcover)
ISBN:  978-1-250-16579-4 (ebook)
Godwin Book; Henry Holt and Company
280 pages
As the author states on the book jacket of The Monster Catchers “Who you gonna call?”  George Brewington has written a middle school novel about a boy named Bailey Buckleby, son of monster hunters on the West coast.  A story of how Bailey and his dad work together to keep their hometown safe.  Bailey learns about making choices early on during the story.  Bailey has a special pet, which is also one of the choices he has to make.  Bailey has his dad, a girl friend by the name of Savannah Mistivich who helps in her own way. 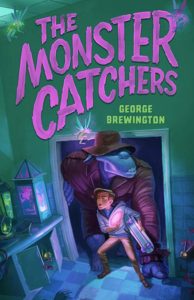 The drawings created by David Miles were creative and well-detailed throughout the book and he made the monsters cute but still kind of fierce at the same time especially the fairies.  The cover picture on the book jacket was what made me read the book to see what would happen for the colors that David chose gives the readers an idea of mystery and science in a way.
My favorite parts were on several pages. The first one was on page 38 with the word ‘cyancephaly’ and a few other scientific words like ‘syrinx’ or bird like.  Another scene that I liked was on pages 125-127 which were all about ‘weresharks’.   This is very creative and adds a little ‘horror’ to the story.  One of the drawings that  I liked again was on page 215 and there was a drawing of a sea giant that were actually islands in the Pacific ocean and a final picture on page 233 of the whale that has a surprise to share with Bailey.  The reader at the end of the story enemies can become friends and dreams can come true.
Teachers and even social workers/counselors could use this book to teach about friendship and proper behaviors in social studies lessons as well as maybe even a few small science/geography lessons about sea life and land formations.  Also, a good book for just stimulating imagination and communication skills.

About The Monster Catchers

Whether it’s a goblin in the garden or a fairy in the attic, Bailey Buckleby and his dad can rid your home of whatever monster is troubling you―for the right price. But when Bailey discovers that his dad has been lying―their pet troll Henry is actually a kidnapped baby sea giant―he begins to question the family business. Enter Axel Pazuzu, criminal mastermind, who will stop at nothing to make a buck. With everyone and everything he loves in peril, it’s up to Bailey to save his family and set things right in this funny, fantastical adventure.

George Brewington writes fantasy stories for both children and adults four days a week. The other three days a week he is a respiratory therapist at a hospital in Charleston, South Carolina. His short stories have been included in anthologies like DARK MAGIC: WITCHES, HACKERS & ROBOTS and PICK YOUR POISON. His first novel for young readers – THE MONSTER CATCHERS – debuted on March 9th, 2019. The sequel – THE REVENGE OF THE WHIFFLES – arrives on March 3rd, 2020. He is also working on a mysterious third novel which is so secret and so strange and so scary, details cannot be revealed at this time. He lives in the marshes of Folly Beach, South Carolina with his family, surrounded on all sides by egrets, owls, alligators, and boo hags.