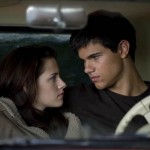 New Moon scenes were unveiled yesterday at Comic Con and the movie looks impressive!   The clips seems to suggest that it is not diverting from the novel written by Stephanie Meyer.  Check out the clips below.  Beware of lots of screaming.  What do you think?

Clip 1
Jacob Black (Taylor Lautner) and Bella Swan (Kristen Stewart) are bent over an antique light blue motorcycle. Jacob wears jeans, a brown t-shirt, and his hair is long. As Bella sits on the motorcycle, Jacob guides her hands (touching!) over the handles. “Brake. Clutch. Gas,” he reminds her. Bella revs the engine. “Slowly release the clutch,” says Jacob.

Suddenly, Bella sees the translucent apparition of Edward, a concerned look on his face, standing in front of her. We can see him, but also see through him. Bella takes off on the bike.

As she zooms down the road, Bella gains speed. She zooms by another apparition of Edward, standing in her path. She speeds by another. Losing focus, Bella swerves and falls from the bike, hitting her head on a rock.

Jacob speeds over to Bella on his own bike, coming to a stop with a flourish. He hops off the bike and rushes to Bella’s side. She is bewildered, and blood gushes from a gash on her forehead.

“Are you trying to get yourself killed?” Jacob asks. Bella apologizes for the blood, but it doesn’t bother Jacob.

He takes a step back, the camera following his every move. Jacob strips off his shirt, revealing a six-pack, and bends down to dab Bella’s wound with it. Their faces come very close.

“You’re so beautiful,” she tells him. Emotion flashes across his face.

Unveiled at the close of the panel, Chris Weitz introduced the pivotal Volterra scene:

Clip 2
Alice and Bella are winding through the streets of Volterra, slowed by massive crowds of townspeople in red robes, celebrating the festival. Bella jumps out of the car.

“You’re the only one he can’t see. He’ll be under the clock tower. Go!” says Alice.

Bella races through the crowded city. We see her at times in slow motion.

She fights her way through the crowd, stopping at the fountain in the middle of the square. In slow motion, she looks up to see Edward, slowly unbuttoning his shirt just moments away from revealing himself in the sunlight. He opens his shirt to expose his pale chest. (And his abs. Very nice abs.)

Bella screams out to Edward. “Stop! Stop! No Edward, don’t!”

He takes a step forward.

Brain Food? The Top 7 For Kids!

Books That Help to Understand Addiction