Maybe He Just Likes You by Barbara Dee

Barbara Dee
2019
ISBN:  978-1-5344-3237-6
Simon & Schuster
304 pages
Barbara Dee explores the subject of #MeToo for the middle grade audience in this heart-wrenching—and ultimately uplifting—novel about experiencing harassment and unwanted attention from classmates.
It seems that we all have problems and issues to deal with and Barbara Dee and her novel ‘Maybe He Just Likes You’ shows a way to deal with these kinds of issues.  Barbara has written a story that answers the questions “How do you know when someone 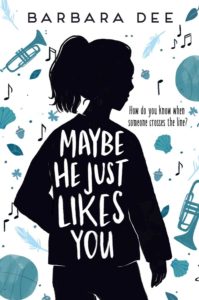 crosses the line?” as the main character of Mila and her friends Omi, Zara, and Max kind of helps each other even though there are many misunderstandings to work through in school.  Mila is growing up as is her friends and schoolmates.  Mila has her own responsibilities at school as well as at home as seen in the chapter ‘Late’.  Mila thinks in the chapter ‘Coverage’ will solve her problem and in the chapter ‘Apology’ Mila learns to accept various behaviors.  In the chapter ‘Surprise’ as adult shares that it depends on the circumstances in working out issues and later a teacher gives Mila something to think about.
Barbara Dee and her novel for young adults ‘Maybe He Just Likes You’ could be used as a book discussion in a school Friendship group lead by the school social worker or counselor.  This is a good book to read for any class for it covers diversity in many ways that the reader will find out

For seventh-grader Mila, it starts with some boys giving her an unwanted hug on the school blacktop. A few days later, at recess, one of the boys (and fellow trumpet player) Callum tells Mila it’s his birthday, and asks her for a “birthday hug.” He’s just being friendly, isn’t he? And how can she say no? But Callum’s hug lasts a few seconds too long, and feels…weird. According to her friend, Zara, Mila is being immature and overreacting. Doesn’t she know what flirting looks like?

But the boys don’t leave Mila alone. On the bus. In the halls. During band practice—the one place Mila could always escape.

It doesn’t feel like flirting—so what is it? Thanks to a chance meeting, Mila begins to find solace in a new place: karate class. Slowly, with the help of a fellow classmate, Mila learns how to stand her ground and how to respect others—and herself.

Barbara Dee is the author of several middle grade novels including Maybe He Just Likes You, Everything I Know About You, Halfway Normal, and Star-Crossed. Her books have received several starred reviews and been included on many best-of lists, including the ALA Rainbow List Top Ten, the Chicago Public Library Best of the Best, and the NCSS-CBC Notable Social Studies Trade Books for Young People. Star-Crossed was also a Goodreads Choice Awards finalist. Barbara is one of the founders of the Chappaqua Children’s Book Festival. She lives with her family, including a naughty cat named Luna and a sweet rescue hound dog named Ripley, in Westchester County, New York. Visit her Website here

Paris Was Ours by Penelope Rowlands Book Review