EZ and the Intangibles by Bob Katz ; a Book review

Bob Katz
2018
Fitzroy Books Regal House Publishing LLC
1SBN: 13: 978-1-947548-18-3
149 pages
“Basketball, anyone!” Bob Katz has written a middle school novel about a boy named Ethan ‘EZ’ Zaney who loves the sport of basketball, but needs to find a way to fit in at school as well as at home.  This is a story that teaches us how and what to do to 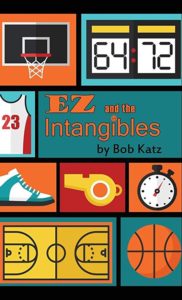 make ourselves better using the talents that we have and EZ does that by working as the team statistician and another position as well.  EZ learns what the actual intangibles are and we all can learn from them no matter what level we are currently learning.
Bob Katz writes for all to understand what makes us us.  The reader will get a sense of what an elementary student as well as the coaches teach and learn about life and understand the feelings of all involved.  Bob Katz did a good job with description and the wording of the story for I could see the gym and the games in particular actually seeing the anxiety in EZ’s face.  We all have had successes as part of being on a team as well as being individuals.
This is a good book for parents, teachers and even counselors to find out where we all fit in at home and at school.  This is a good story to help us to understand how children try to fit in using the talents they have. The cover art displays how the elements of basketball and how to survive a society of competition and how to cope with the intangibles of the game and living.

EZ and the Intangibles by Bob Katz on Amazon

Ethan “EZ” Zanay loves the sport of basketball and it’s really unfortunate he’s so darn bad at it. After making an embarrassing mistake in front of his teammates, EZ finally decides to call it quits. End of story? Not quite yet. EZ’ lack of basketball talent is far from his only problem. He’s isolated from classmates and wanders the fringe of the schoolyard alone during recess, gazing at the games he’s never invited to join in. When his father, a popular former sports star, is accused in a business scandal, the family must suddenly wrestle with financial problems. Plus, EZ’ bothersome kid brother is the town’s most promising young athlete, fast becoming a local legend. And making matters worse, EZ still clings to the fantasy that someday, somehow, he might yet turn into that unheralded player who surprises everyone by coming through in the clutch. His best shot at a comeback is to specialize in those subtle moves and unseen maneuvers that don’t show up in the standard stat sheets. EZ’ secret game plan is to focus all his efforts on making the most of the intangibles. But he’ll only succeed if somebody is there to notice.

Bob Katz  is the author of several acclaimed books, including the novel Third and Long (3rdandLong.net), winner of the 2011 Independent Book Publishers Association fiction award, Elaine’s Circle, a non-fiction account of a dramatic year in the rural Alaska classroom of an innovative school teacher, the novel Hot Air, which was optioned by actor Michael Keaton and MGM for a movie, The Whistleblower, a nonfiction exploration of the world of college basketball referees, and, most recently, EZ and the Intangibles, a novel for middle readers.