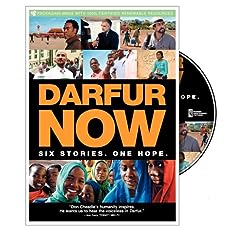 Darfur Now begins with a young mother who shows us her scars as she describes being beaten by the Janjaweed.  If that isn’t shocking enough, she begins weeping as she relates how they beat her on the back whild attatched to her back was her young child.  He did not survive.   One documentary that you can watch to raise awareness and see how you can help is Darfur Now.  Some basic facts are provided at the beginning of writer-director Theodore Braun’s 98-minute documentary: Located in western Sudan, Darfur, a region about the size of France with a population of six million, has been in a state of severe crisis since 2003, when non-Arabs rebelled against the Muslim government. Working in tandem with the dread Janjaweed (literally “devils on horseback”) to wipe out the rebels, military forces have enacted a relentless and systematic genocide that has resulted in hundreds of thousands of deaths, with millions more displaced. The film then focuses on six individuals and their roles in the conflict. Luis Moreno-Ocampo, prosecutor for the International Criminal Court, works to collect evidence to use against the Sudanese authorities; Adam Sterling, a young American enraged by the lack of world response to the crisis, campaigns in California to pass legislation to force companies with interests in Sudan to divest; Pablo Recalde of the West Darfur World Food Program strives to provide food and save lives; Ahmed Mohammad Abakar, chief sheikh at a camp for displaced persons in Darfur, tries to rally his people; Hejewa Adam, a female rebel, trains to fight the Janjaweed; and actor-author Don Cheadle uses his celebrity (as well as George Clooney’s) to raise public and official awareness of the situation.  Those are the facts but the heart of the documentary for me was Hejewa.  She talks matter of factly about how she decided to fight with the rebels after they killed her child.   She describes fighting “as very normal as if drinking water.”  Ironically she also makes the statement while holding gun in her hand, that fighting will not solve this problem.  She doesn’t have a choice, and she knows they need more then a band of mothers and young men fighting the Janjaweed to change their horrible situation.  Fighting is her way of staying safe,  I cannot imagine her pain and I truly admire her strength.  She is a hero to me.  Another thing that struck me right in the heart was another group of mothers who were sacrificing being away from their children by fighting.  They slept with rocks for pillows and little food or sleep.  The women began discussing how the white people will come and help them.   Build houses and pave their roads like they do for other people.  They need our help!   I am sponsoring Natasha from Maw Books who is reading to raise money for women like these remarkable ones that I have described from the documentary.  It is my hope you will feel inspired to action in some way.   I  was inspired to learn more about the atrocities in Darfur by Natasha because of the things I read on her blog Maw Books.   You can go to her blog to see what you can do, or you can go here to www.savedarfur.com.