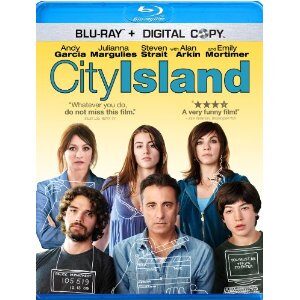 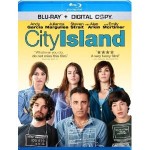 City Island is a movie that takes the notion of a dysfunctional family to a whole new level.  Available on DVD and Blu-ray August 24th from Anchor Bay Entertainment, the film stars Andy Garcia as prison security guard Vince Rizzo, who secretly desires to become a movie actor.

Just outside New York, on a small island, the Rizzo family carries on in their usual ways.  Mother Joyce, played by the refreshing and youthful looking Julianna Margulies, tries to keep her home in order but has some resentment toward her husband.

Vivian (Dominik García-Lorido) is the daughter home from ‘college’ on spring break. What her parents don’t know is that she has been kicked out of school for drugs and is making money as a stripper during the interim. Vince Junior (Ezra Miller) provides much of the comic relief for the movie as a goofy teen with a fetish for feeding plus-size women.

The premise of City Island takes effect when Vince discovers that his 24-year old illegitimate son, Tony (Steven Strait) is about to be paroled from his prison. In an attempt to make up for lost time, Vince agrees to take responsibility for Tony for the first 30 days of his release.

As Vince pursues his first acting gig, he befriends a woman (Emily Mortimer) from his class. Joyce sets her eyes on Tony, not realizing he is her stepson. Tony struggles to avoid his mischievous ways while ironically bringing order to the chaos.

With some offbeat family lessons, City Island is an oddly clever and often funny movie. Garcia is at his best in a quirky comedy lead. Margulies appears to have found the fountain of youth well after her ER days. Miller adds a lot of comedic quips throughout despite his annoyingly goofy persona. Strait is capable as the central figure in the plot.

While it may take some time to get immersed in the culture of City Island, the story is captivating, the characters are tremendous, and the comedy is original. 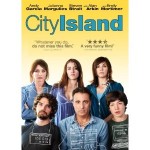 We are excited to be able to offer ONE WINNER a copy of the City Island DVD by following the guidelines below!

One Bookroom Reviews reader gets this new Blu-ray!

Comment on any current review and tell me which one here.