As a huge Beatles Fan and I guess for any fan of the Beatles Bollywood Invasion by Ricardo Alexanders  could very well be looked at as BLASPHEMY!

You could just see a fun time traveling Rock-n-Roll alternate universe or parallel dimension. Take your pick. The time travel thing has always interested me. There is so much to think about when traveling back in time is involved.Would it really be possible to travel back to a time before you were born? 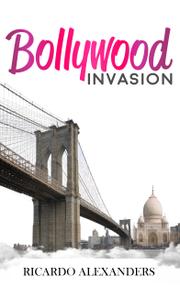 What happens here is A 16 year old kid (John) in Modern day Brooklyn New York gets hit by a bus.When he awakes he finds himself zapped to India 1958. To make matters a little more interesting it seems he is part of a Royal family which makes him a Prince.

*Spoiler Alert*  So after he figures out what happened and where and who he is he tries to adapt to his new life.He has a hard time at first with some wild living. Once he decides to calm his wild living down he meets some musicians. These Musicians ask him to join their little group. The only reason he is asked is because he happens to be a rich prince and can provide the equipment he group needs. Turns out his new band mates soon find out that “John” is a song writing Genius! (not really because he is just ripping off Beatles tunes he remembers). But since this is 1958 nobody ever heard these songs before.

There is so much more to this story,but the music is a big part of it. John not only has to deal with tragedy along the way but he begins to realize he knows what’s going to happen in some instances. There are a lot of questions I have about the way things would work in a story like this. I’m still up in the air about how I feel about the ending. But all in all it was a very good read.The fact that it takes place in India is also interesting .The author does a good job explaining the culture with the help of his many footnotes it’s easy to follow along and actually learn a few things. It also took me awhile to “GET” the title but I finally figured it out. Clever.

A fantasy novel about a modern-day American boy who wakes up in 1958 India as the reincarnation of John Lennon.
Bollywood Invasion opens when the protagonist, a sixteen-years-old boy from Brooklyn, finds himself with riches and power beyond his wildest fantasies in India, thirty-five years before he was born.
Brooklyn is readily forgotten. Life becomes a constant stream of debauchery, coming to a stand-still only when he meets “the one.” However, love doesn’t come easy. He must become a better man, a pursuit ignited by his memories of Beatles songs on his iPod.

Ricardo Alexanders, an indirect decedent of the Great Yyu, was born in China, educated as a chemist, specializing in innovative drug formulation development. In his spare time, he is a passionate writer and loves writing History/Science Fiction.

Dragon Tomb is his first book. Ricardo wrote this book to pay tribute to his ancestors. Dragon Tomb is also the first book of The Last Resistance pentalogy. The tentative titles for the rest four are: Resurrection, Total Invasion, Red Dragon, and the series finale, Genesis. Sharing of such titles is meant to set a clear goal for Ricardo in building an unique/brand-new world for readers and motivate him to finish the pentalogy within five years.

Ricardo’s newest book is “Bollywood Invasion”, which tells an unique story about a boy from Brooklyn who goes to India, wins the heart of his dream girl and conquers the world with music inspired by the Beatles.