7 Steps to a Happy Marriage by Jenna McCarthy 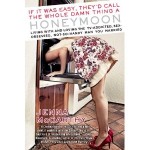 In celebration of the Tuesday, October 4th release of her new book, If It Was Easy They’d Call the Whole Damn Thing a Honeymoon: Living with and Loving the TV-Addicted, Sex-Obsessed, Not-So-Handy Man You Married (Berkley Books), Jenna McCarthy has provided the following guest post for our site.

You can also catch Jenna on the “Today Show” Monday, October 3rd, promoting the book.

Jenna will be on The Today Show Monday October 3rd promoting the book, don’t miss it!

7 Steps to a Happy Marriage
by Jenna McCarthy

I have a remarkably happy marriage, and people ask me all the time how I got so lucky. (Not as often as they ask me about autism, vaccines and Jim Carrey, so let’s get something straight before we go any further: Not. Her.) I used to wonder if it had something to do with pheromones or having relatively low expectations, but after eleven years of wedded bliss I am pretty sure the key is some combination of kindness, respect and my ability to read a road map upside down divided by my husband’s skill at tuning out my nagging.

Okay, fine. We got lucky.

Busloads of studies have attempted to figure out why roughly every other marriage fails miserably. Turns out, the success stories share a few similarities beyond the obvious stuff like “they don’t have sex with other people”. Here, then, are seven scientifically proven* steps to marital ecstasy.

1. Be thinner and better looking than your husband. I have no idea why this works to create nuptial delight but I’m guessing it’s because if you’re fat and ugly you probably never want to have sex, which makes him grumpy and mean because sex was the one and only reason he got married in the first place. (Well, that and pie. Think about it: Most guys will never bake a pie in their lifetimes and from what I’ve seen, they really like pie.) Of course, I don’t know many women who are dying to have sex with fat, ugly men, so this one remains a bit of a mystery.

2. Make sure he does more chores than you do (well, duh) and try to talk less than he does. I have to admit, if you asked my husband the top three things I could do to make him happier, “shut the hell up for five lousy minutes” would probably be on the list. (But not at the tippy-top. Ahem.)

3. Don’t watch a lot of chick flicks. Seems that after sitting through Gnomio and Juliet (or any other rom-com) relationship dissatisfaction tends to skyrocket. Apparently this is because maybe it could happen to you but you realize that it hasn’t and it probably won’t and that fat bastard never sprinkled rose petals on your bed, dammit. At least you’re thinner and better looking than he is.

4. Don’t win a best-actress Oscar. I included this one because unlike getting hotter or having your jaw wired shut, it’s actually pretty painless and doable. Personally, I am going to make this a priority in my marriage.

1. Limit your booze consumption (both of you). No comment.

1. Become or urge your partner to become a farmer, nuclear engineer or optometrist. Evidently every career choice has its own unique divorce-risk profile, with these three being on the lowest end. Dancers and choreographers are pretty much screwed. You can’t make this stuff up.

2. Prefer having the car windows down. I haven’t technically seen a study on this, but do you not fight about this every single time you ride in a vehicle together? And doesn’t he get all pissed when you want them up and accuse you of being more concerned about your hair than his precious need for non-recirculated air? If anyone bothered to study this, I’m confident the results would back me up.

So there you have it. I do not suggest trying to master all seven steps at once. For instance, if you stop doing housework altogether (to try to tilt his portion of the ratio toward more), you’ll have a lot of extra time on your hands which you may want to spend drinking alcohol. Remember, there’s no rush here. Till death do us part is a really long time**.

Don’t forget to google Zestra after you watch it… or better yet, check out the link on Jenna’s homepage:
http://www.jennamccarthy.com/

*I may have bastardized the language a bit in some cases but the facts are mostly accurate.

**I stole that line from If It Was Easy They’d Call the Whole Damn Thing a Honeymoon: Living with and Loving the TV-Addicted, Sex-Obsessed, Not-So-Handy Man You Married, which I wrote (and please note that it says the blah-blah-blah man you married, not the one I married. My husband likes it when I point that out). You can find out more about me, my books and how I survived tanorexia on my website.

I was compensated for placement of this blog post. Any original opinions in the introduction are my own.

Developing A Love For Art

Buying real estate in a down market