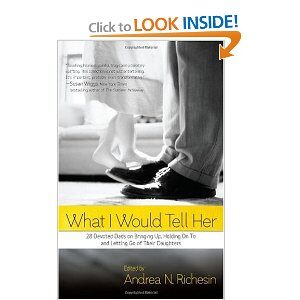 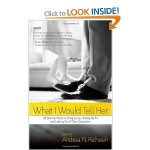 In his essay Do I Dote? in What I Would Tell Her, Eric Goodman writes: “She knows, with certainty, that I love her unconditionally. She knows she can ask me pretty much for anything and that, if it is within my power to provide it, I will. She knows that I am torn between wanting to do things for her and pushing her out into the world on her own, and I know, because she is such a good person, that she knows not to ask for too much.”

I wondered what a book on father-daughter relationships written by the fathers would be like, and I was astonished at the life stories chronicled within the essays of this anthology, filled with hope and meaning! Fathers from all walks and time periods of life responded wholeheartedly about their feelings for their daughters (this not being Ward Cleaver’s Silent Generation), from the father who stands aside to let his daughter make her own mistakes, even falling off a horse! (The Man On The Stairs by Robert Wilder) to the “stepfather”, a man in a male relationship whose partner has a daughter from a previous marriage, so he doesn’t have any say in raising her (Confessions Of A Faux Pa by Swan Adamson) but then writes a novel about her life, to a 51-yr.-old man (Late-Onset Fatherhood by Rand Richards Cooper) who is dealing with family illnesses and death that he didn’t have at age 30, but still says that the birth of his daughter is the happiest day of his life! The wide range of educated answers to the title question “What I Would Tell Her” is, of course, a tribute to the selections of the editor, Andrea N. Richesin.

While reading this anthology I stopped to phone my own brother, whose wife had died when his daughter was 8, with the suggestion that he write something similar for her, who is now 21 and a music student at a university. I myself would have loved to have such a story to cherish from my father’s point-of-view, before or after his death (I found out that he was very proud of my writing from a friend of his long after he’d passed away, but didn’t know about it as I was struggling to become a writer) – although in my case I knew that I was loved via the hundreds and hundreds of photos of me my father took and developed himself throughout my childhood and adolescence in the pre-digital camera era.

Some issues come to mind only when you sit down with the purpose of writing about your daughter’s life with you, and I could see that the writers in this anthology loved creating accounts of their daughters in concrete form and in the name of fatherhood itself. They’ve also left each of their daughters a priceless prize of pride and concern good as any statuette or trophy, thus proving to us again the power of the written word.

In Andrea N. Richesin’s introduction she begins with the Swedish folk tale Singeli’s Silver Slipper where “a poor cobbler sews his daughter a pair of magical shoes to protect her from harm and lead her on many adventures. When it’s time for her to go out in the world on her own, her father says ‘These silver slippers will guide you in the right way. In them I have put all my love.'” Richesin goes on to say that the writers of these essays “have invested a similar love, almost overpowering in its intensity” and “they take us on a journey through the many stages of fatherhood, adolescent to sweet sixteen, graduation, becoming a grandparent and even the loss of a child.” With sentiments perhaps never even voiced orally to the daughters themselves, we see how these fathers have lived day-to-day, and even minute-to-minute, caring about the fates of their daughters.

Many of these essays have the literary qualities of short stories, since attention to detail is very vivid in the fathers’ minds, especially in the sad recounting of a stillbirth, Daniel Raeburn’s Vessels. Or consider this first paragraph from On Inexplicable Weeping by Dean Bakopoulos: “It’s Christmas Eve – snowy and windy, dangerously cold – and my daughter Lydia is running around in circles, laughing and shaking her head.

She is three and a half. She is, against our better judgement, cranked up on the high-fructose corn syrup that laces candy canes and chocolate elves. And although the prospect of Santa Claus and reindeer on the roof and presents under the tree are all wonderfully exciting, she is anticipating something even more exhilarating: the limelight. In just a few minutes she will take the stage…..” Can you envision it?

What I Would Tell Her is a veritable cornucopia of family life, filled to the brim with life experiences and rich and complex emotions, and I feel the better for having read it. Read it too and you’ll find yourself recommending it to anyone who’s ever been the member of a nuclear family. The essay style makes it easy to enter one life and then put down the book and re-enter your own, only to come back to this faithful companion waiting for you on the table, bookshelf or nightstand with another enriching new story.

What I Would Tell Her, 28 Devoted Dads On Bringing Up, Holding On To And Letting Go Of Their Daughters, edited by Andrea N. Richesin, Harlequin paperback, on sale May 10, 2010, 261 pages.
Reviewed by Christina Zawadiwsky
Christina Zawadiwsky is Ukrainian-American, born in New York City, has a degree in Fine Arts, and is a poet, artist, journalist and TV producer. She has received a National Endowment for the Arts Award, two Wisconsin Arts Boards Awards, a Co-Ordinating Council of Literary Magazines Writers Award, and an Art Futures Award, among other honors. She was the originator and producer of Where The Waters Meet, a local TV series created to facilitate the voices of artists of all genres in the media, for which she won two national and twenty local awards, including a Commitment to Community Television Award. She is also a contributing editor to the annual Pushcart Prize Anthology, the recipient of an Outstanding Achievement Award from the Wisconsin Library Association, and has published four books of poetry. She currently reviews movies for , music for , and books for .

Not Forgotten; By Donna Zadunajsky – A Book Review