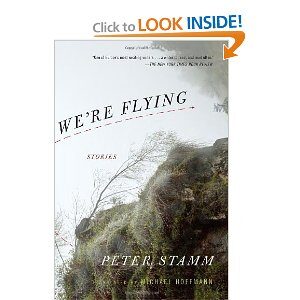 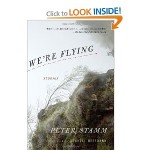 What happens if you’re a priest who comes out of the knave to give a sermon and distribute Holy Communion, and you see that no one has come to church? In Peter Stamm’s story Holy Sacrament in his book of short stories We’re Flying, Reinhold, a minister involved in a crisis of faith, finally “couldn’t stop laughing, for at the end of many weeks of darkness, he finally saw the light.” Translated from the German by Michael Hofman, Stamm’s stories are as compelling as a heart attack and as light as an ironic wtitter, both decidedly Swiss and international.

In the story Expectations, A spinster living alone becomes an “unexpected visitor” when she thinks that she hears something odd in the apartment upstairs and goes to investigate. She meets Patrick, her neighbor, and thinks that he is like a child (he is younger than she is). “He has a favorite month, a favorite season, a favorite flower, a favorite animal, a favorite novel, and so on. That’s all he has to say for himself. I think he has nothing else. He’s just like my kids

at kindergarten. When I ask them what they did on their vacation, they say Played. He really is like a child, cheerful and helpless and sometimes a bit shy. He seems to be perpetually surprised. And he laughs a lot. He asks me if I like children. Sure, I reply, it’s my job.” But then the woman finds herself talking about “everything under the sun” with him, and we can see that Peter Stamm is one of those rare male writers who can write in a woman’s voice with complete authenticity, having hooked into the universals between women and men. And yet this is no ordinary love story.

In The Result an older man works overtime at a hotel, waiting for the time to come when he’ll find out the results of his medical tests (about whether or not he has a deadly disease). In Three Sisters a woman almost applies for art school but

then doesn’t (having painted the Three Sisters, three mountains next to each other, where legend has it that three sisters were turned to stone for not sharing their berries with the Blessed Virgin). In The Hurt a young man is disenheartened because his high school sweetheart, when he’s returned from college, seems promiscuous, and won’t return his love. In We’re Flying a young teacher realizes that her life is making her very unhappy. All are displeased by their life situations but can’t – or won’t – change them. These people are like left-behind items “in a box where all sorts of lost and forgotten things were kept until someone came for them” (from Men and Boys), and they are people engaged in “the loneliness of never-being-alone” (Video City), leading their lives of quiet desperation for years on end.

Yet we identify with Stamm’s characters because we too have had mothers who have died, or lovers who rejected us while we still loved them, and going through the motions of life is better than leaving it altogether. In the story The Letter Johanna actually decides that her husband’s cheating was not an act against her at all.

Isolation and loneliness pierce the pages of We’re Flying, and I would definitely highly recommend this book by an author who has his hand on the pulse of the hidden secrets in our everyday worlds. Stamm’s characters don’t scream, but we certainly hear them.