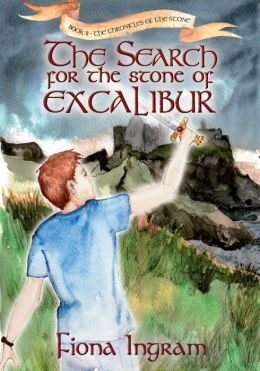 The Search for the Stone of Excalibur (The Chronicles of the Stone, Book 2)

Since I didn’t read Fiona’s first book in the series I just had to get it . So that’s exactly what I did. I have always liked to delve into a series.As long as it keeps my interest. Does this one ? Why funny you should ask(you did ask didn’t you ?)

The Search for the Stone of Excalibur is a well written,well put together Young Adult novel and I’m sure that will be the same for the rest of the books to come. The author, Fiona Ingram wrote a really nice what I would call a Mystery Adventure. What I can’t do of course is give to many spoilers but the book takes up where The Secret of the Sacred Scarab left off. But this adventure in their search for the Stone of Excalibur takes them to where else but England or the UK to be more precise. Did I say Excalibur ? Yes that Excalibur.Now whats cooler than searching for King Arthur’s sword? Besides the fun of the King Arthur stuff we learn a bit more about the mysteries of the Stones and something called the Scroll of the Ancients. We are also introduced to a few new characters in the installment.There’s Kim who the cousins are not all that sure about in the beginning but they find out as the story goes they’re lucky to have her along.You’ll also meet a few other eccentric’s along the way like Ink Spot or is it Blot, well you’ll find out when you read the book. It’s a fun fast paced adventure perfect for the Young Adult.

1. What do you do when you’re not writing?

I read a lot for pleasure and research, I edit for a big US book review site, I watch movies because I find them inspiring, enjoy my home and being with my daughter, and my animals Chloe and Pumpkin, who are two small pooches, and Bertie Wooster, a beautiful black cat.

2. Have you always wanted to be an author?

Don’t laugh; I spent many years wanting to be a nurse until I discovered I couldn’t stand the sight of blood. Then I studied drama at university, won overseas scholarships to London and Paris, and spent a few years in theater before finding my niche as a writer. So, no, I didn’t know for quite a while that I wanted to be a writer.

3. Have you always wanted to write this type of book? (Fantasy-adventure)

It kind of happened by accident because my first book (The Secret of the Sacred Scarab) was inspired by an adventure – my wonderful mum took me and my two young nephews to Egypt and it was quite an adventure! Then I guess the adventure bug bit me and the series has continued. I write historical romance as well (under a pseudonym, Arabella Sheraton) and I started writing these books because mum loved the genre. Lately I have been writing fund-raising animal rescue stories.

4. Who is /was your favorite kids’ author?

5. Who is your favorite fictional literary character from any Genre?

Toad of Toad Hall, from The Wind in the Willows. I just love him to bits.

Ratty. He is organised, methodical and a bit of a worrier. If he packs a picnic, you know he won’t have forgotten anything.

7. Classic Question here. Three people living or dead you would like to meet? What would you ask them?

Author Terry Pratchett: how did you create the Discworld series?

Actor and author Stephen Fry: what’s it like being you?

8. What would the title of your Autobiography be?

9. Ten years from now, if you look back how many books will you have written?

Seven planned books in The Chronicles of the Stone adventure series (three written) with a Companion Guide to accompany each one (two written); seven historical romance novels already written with another brewing; two animal rescue books with another three brewing; a YA fantasy that won’t go away – final count possibly 28-30 … I hope!

10. And finally what is your favorite book and why?

It just has to be The Moonstone by Wilkie Collins (1824-1889). Written in 1868, it was enormously innovative for its time, and Collins has been called the forerunner of detective fiction. T.S. Eliot described it as ‘the first, the longest, and the best of modern English detective novels.’ It is still considered to be one of the most carefully plotted works of fiction ever written. It has: suspense, romance, drama, murder, history, legend, magicality, deception, suicide, multiple points of view (beautifully handled). It’s a gem.

Thank You Fiona and good luck and happy writing

Now a little more About the Book

Summary: A modern day adventure as our protagonists search for Excalibur and the treasures it holds!

Continuing the adventure that began in Egypt a few months prior in The Secret of the Sacred Scarab, cousins Adam and Justin Sinclair are hot on the trail of the second Stone of Power, one of seven ancient stones lost centuries ago. This stone might be embedded in the hilt of a newly discovered sword that archaeologists believe belonged to King Arthur: Excalibur.

However, their long-standing enemy, Dr. Khalid, is following them as they travel to Scotland to investigate an old castle. Little do they know there is another deadly force, the Eaters of Poison, who have their own mission to complete. Time is running out as the confluence of the planets draws closer. Can Justin and Adam find the second Stone of Power and survive? And why did Aunt Isabel send a girl with them?

Join Justin and Adam as they search not only for the second Stone of Power, but also for the Scroll of the Ancients, a mysterious document that holds important clues to the Seven Stones of Power. As their adventure unfolds, they learn many things and face dangers that make even their perils in Egypt look tame. And how annoying for them that their tag-along companion, Kim, seems to have such good ideas when they are stumped.

The first book in the series, The Secret of the Sacred Scarab

has enjoyed the following book contest wins and nominations:

“Fiona Ingram’s storytelling is masterful; she adroitly weaves historical fact and fantasy in a smooth and fluid style that makes reading this book both an exciting and intellectually satisfying treat. The Search for the Stone of Excalibur is filled with action and adventure, puzzles and ghostly presences, and stalwart companions ready to face any and all perils that come their way. What more could a reader ask for? The Search for the Stone of Excalibur is a marvelous historical adventure tale, and it’s most highly recommended. (5 stars)”~ Jack Magnus, Readers Favorite

“As always, Fiona Ingram’s masterful description paints a vivid picture of the setting for this adventure, beginning with the honey-tinted Cotswold beauty of Oxford before moving on to the wilder, rugged landscape of Scotland. But Fiona’s particular skill lies in the wonderful characters which she creates to people these adventures… (5 Stars)” ~ Dassie, Amazon

“Character development is the key to the story, and the dialogue is snappy… If there are young reluctant readers in your family, this might just be the kick they need to get over that hump. (5 Stars)” ~ Lit Amri, Readers Favorite

“Fiona Ingram has once again taken myth and legend and blended it into an exciting page turner. The mystery will keep the reader on the edge of their seats as they follow the cousins in their search for clues in old books and on the grounds of a Scottish castle. The story is well told and is suitable for tweens and up. (5 stars)” ~ K. Springs, Amazon

“Ingram describes her characters and locals in such a vivid way that the reader cannot help but picture themselves right there alongside the cousins. I loved the historical information at the end as well as the preview of the next book! I cannot wait! The Search for the Stone of Excalibur is certain to be the next great young adult series of our time! (5 stars)”~ Heather Osborne, Readers Favorite

About the Author: Fiona Ingram

Fiona Ingram (B.A., Hons. (Natal), M.A., (Wits)) was born and educated in South Africa, and has worked as a full-time journalist and editor. Her interest in ancient history, mystery, and legends, and her enjoyment of travel has resulted in The Secret of the Sacred Scarab, the first in her exciting children’s adventure series—Chronicles of the Stone. The second book is entitled The Search for the Stone of Excalibur, a treat for young King Arthur fans. She is busy with Book 3 entitled The Temple of the Crystal Timekeeper.

How to enter: click here to get to our giveaway page

Terms and Conditions: NO PURCHASE NECESSARY TO ENTER OR WIN. VOID WHERE PROHIBITED BY LAW. A winner will be randomly drawn through the Rafflecopter widget and will be contacted by email within 48 hours after the giveaway ends. The winner will then have 72 hours to respond. If the winner does not respond within 72 hours, a new draw will take place for a new winner. Odds of winning will vary depending on the number of eligible entries received. This contest is in no way sponsored, endorsed or administered by, or associated with Facebook. This giveaway is sponsored by Fiona Ingram and is hosted and managed by Renee from Mother Daughter Book Reviews. If you have any additional questions – feel free to send and email to Renee(at)MotherDaughterBookReviews(dot)com.

Copyright © 2015 Mother Daughter Book Reviews, All rights reserved.
You are receiving this email because you signed up to participate in “The Search for the Stone of Excalibur” Blog Tour hosted by MDBR.