Once Upon a Poodle by Chrysa Smith a Poodle Posse book 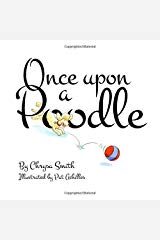 Who doesn’t like a cute puppy dog? ‘Once Upon a Poodle’ is a children’s picture book written by Chrysa Smith and drawn by Pat Achilles. It is the Prequel of the award winning Poodle Posse series This is the story of a cute poodle by the name of Woody and his search for a friend to play with every day, even though he does love his master, but she cannot play the games he likes most not too well.  Woody makes several new friends when he goes out the doggie door, but they somehow are not quite right to take home.
L 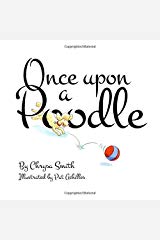 ike the rest of the Adventure of the Poodle Posse series The pictures were bright, cheerful and colorful using the primary colors and making the story move from page to page.  The characters that the illustrator drew made them all cute and cuddly and made the story fun to ‘read’ just through the pictures.  ‘Once Upon a Poodle’ when used in an early childhood or even a primary grade classroom teachers can teach about what makes a friend and friendship in general.  The reader will even sense the various emotions from the repetition of looking out the window to finding out which animals don’t fit and then finding success.
My favorite pictures were the ones on page one with the letter to readers that express love and comfort from the book. The next ones were on pages four and five when his mom would play his games the best she could, and in general all the pictures of the action pictures throughout this picture book solving his problem.

When Miniature Poodle Woody faces the same-old playtime with his human mom, who is none too good at dog games, he begins a search for a new playmate, perhaps even a brother. After several attempts, their household turns to chaos as nuts are cracked, feathers fly and gardens are harvested. But persistent Woody keeps searching and doesn’t give up until the right one comes along. Who will it be? Find out in Once upon a Poodle, a prequel picture book to the award-winning series: The Adventures of the Poodle Posse.
The Poodle Posse series is fun and entertaining.Check out all the “POODLE” books

The Adventures of the Poodle Posse won a silver Mom’s Choice Award in juvenile fiction, for excellence in family-friendly media. Shortly after, the series began to grow, winning a spot on Amazon’s Children’s Bookshelf, an endorsement from The Dove Foundation and most recently, another Mom’s Choice Award for the latest picture book, Once upon a Poodle.

Chrysa SmithIs a double-decade writer who has turned a love for writing into loving what she writes about–namely home, food, fashion, beauty and most recently, her pets.

Her work allows her to be a perennial student; always learning something new including navigating the world of children’s books.

It began in 2007 with her first book in The Adventures of the Poodle Posse series, followed by Once upon a Poodle. She stepped out of her wheelhouse for the newest release, The Upside-Down Gardener,  having been inspired by a thwarted attempt at gardening.

She has also spent many hours are spent in classrooms, talking to kids about her love for writing and encouraging them to move forward with theirs.

Am I A UNICORN