Tron: Evolution Battle Grids is Nintendo Wii game from Disney Interactive that released in December to coincide with the theatrical release of the Disney movie Tron: Legacy. 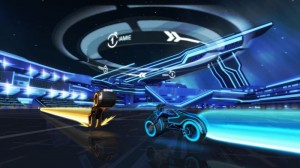 TRON: Evolution has a story set around a series of seismic events within the Grid of TRON. Players control a security program, Anon, who must protect the digital world from Abraxas, a dangerous computer virus. Players will witness unique moments that are referenced or shown as the backstory of the thrilling “TRON: Legacy” story. The game features the iconic TRON vehicles – light cycles, light tanks and recognizers – and has high mobility combat using light discs. The multiplayer modes enable up to 10 players to take on each other online in a variety of maps with on-foot combat, light cycles and light tanks.

We Are Excited to Offer:

Leave Separate Entry For Each