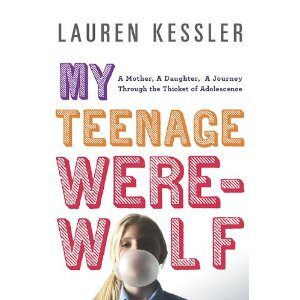 If you really want to learn a foreign language, go to that country and immerse yourself in it – and that’s exactly what journalist Lauren Kessler has done in exploring the alien terrain of her middle-school daughter Lizzie – she’s gone to her country. The Author’s Note at the front of the book tells us that her daughter’s name has remained the same but those of her friends have been changed for the sake of privacy – however none of the events or conversations have been changed except through interpretation (which I know must sometimes occur, as we are not robots!). There were no creations or composites of characters.

After a “magical decade of peace, love and understanding”with her mother (which the mother thoroughly enjoyed!), Lizzie was on the brink of teen-age-hood, wearing favorite clothes for days on end and “She turns her head and gives me a look. There may be nothing quite so withering as the look an almost teenaged daughter can give her mother. What is it, exactly, that look? Exasperation, annoyance, disgust? And that’s on a good day. Sometimes it’s pure, unadulterated antipathy. She sighs dramatically and mutters something under her breath. I don’t want to know what she says.” Her daughter also stands before her and “I know this posture. I stood in front of my own mother like this countless times. The stance communicates two of the sacred tenets of teen girlhood: boredom and defiance.” And Lauren is shocked to find herself and her 12-yr.-old daughter in a state of “mutual hostility.”

I’ve read that, psychologically-speaking, to attain individuation a daughter must first cut the (usually very strong) bond with her mother and then with her father, so that she can go on to replace those loyalties with a boyfriend and later marriage. Defiance on the teen girl’s part, often supposedly over nothing at all (like “eating fish for dinner”) is normal. “There is no relationship quite as primal, as vitally important, or as deeply conflicted. Mother-daughter identities are enmeshed and interwoven, yet need to be individual and distinct. There is no other relationship that veers so sharply between intimacy and distance, between love and hate.” Yet the mother, newly knocked down from her “mother-goddess” and protector pedestal, is at a loss for both words and appropriate emotions (even if she’s acted in a rebellious manner towards her own mother years before). Lauren’s Lizzie is particularly important, being the third and last of her children and her only daughter.

The author also fears that she and her daughter could become cold and distant, as she and her own mother had been for thirty years until her mother was in the middle of Altzheimer’s and returned to be taken care of by Lauren — and that she would also lose the only other female in her nuclear family, the one she’d doted on for so many years before this. So Lauren decides “I give myself the next eighteen months — from the middle of seventh grade, where Lizzie is now, to the beginning of high school, where she will be fully launched into her teen years. I will make this work, or go down fighting.” She decides that her fighting weapons will be reading and research and actual investigation, which she has always used before this to navigate through her world.

It seems fitting that the author chose this struggle to chronicle in My Teenage Werewolf, since it may easily be the most important conflict of her life, and within it might occur the seeds of a resolution of what went on with her own mother. Lauren reads voluminously about teen psychology, new discoveries about teen brains, teen discipline and mood swings and the new societal stresses (with heightened expectations) of the current generation. She talks with other mothers, physical doctors, teen therapists and specialists, and compares notes. No one could do more thorough research – and one woman, Kinlen, tells her, “I think teenage girls are here to help us heal the wounds of our own past,” and that mothers should not be control freaks but “a loving mentor.” And then Lauren begins to do on-site research at Lizzie’s school.

My Teenage Werewolf (despite its humorous and affectionate but perhaps misleading title) is a bold book, because how many mothers (even if they are writers) would do this kind of field research? It matters to Lauren that she and Lizzie be close, and if you look at the photo of them on the book’s back inside jacket cover, smiling at each other, you would think that they are. But what is close, for someone who hasn’t known closeness with her own mother? (A new discovery?) In the Acknowledgements section Lauren first writes: “This book would not have been possible – or, possibly, necessary – without Lizzie, my charming, alarming, disarming, mercurial, and totally miraculous daughter. My great debt is to her for agreeing to this project; for letting me into her life at a time when many girls want as little to do with their mothers as possible….” and, obviously, in this collaboration Lauren did become close to Lizzie, as close as one can be without crossing the identity line. (I don’t know of ANY daughters who would have allowed their mothers to come to school with them!) Girlfriends, divorced kids, boys, kids with problems – Lizzie seems to learn more from them than from her classes, which, so unlike her mother’s in the seventh grade, include topics like “Gender stereotypes” and “Socially responsible science.” Because indeed that is the difference between home and public schooling – socialization (school, where we meet people totally unlike our families).

Going where not many

have gone before, with a lantern in her hand seeking out the truth about a crucial turning point in the lives of all girls, Lauren Kessler is to be commended for both her bravery and her intellectuality in a very emotional realm. Mothers, daughters, women of all ages, men – all should read this book to see what it’s REALLY like being a girl, or at least one specific girl in this time and age!

My Teenage Werewolf: A Mother, A Daughter, A Journey Through The Thicket Of Adolescence, a book of literary non-fiction by Lauren Kessler published by Viking/Penguin Group, on sale August 9, 2010, 256 pages.