I Know My Dad Loves Me by Scott A.Williams a book Review 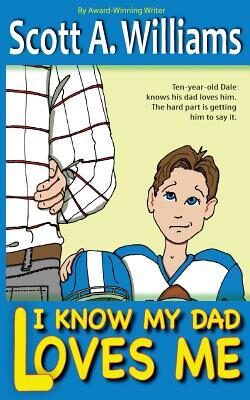 Not quite what I expected when I received this book. I thought it would end up being a kind of “mushy”girlie type book.But once again I was wrong.
Dale is a ten year old boy that as the title suggest knows his dad loves him(because in Dale’s mind Dads always love their kids). Problem is his dad has never told him that.On the back cover of the book it says Dale is just trying to get his Dad to say I love you but that’s not really what it’s all about. This book is not so much about the relationship between Dad and son but more of a look at the family dynamic itself.There’s Mom of course and little Sister Clare (daddy’s little girl). Aunt Stephanie

and Grandpa.
Dad is the typical construction worker type played football as a kid while Dale is on the smaller side. and not sure he can live up to what he thinks are Dads expectations.While it seems all Dale wants is to please dad and make him proud I’m thinking Dad already is.He sees his son for what he is and might even know him better than Dale knows himself.When Dale is worried and a bit reluctant  about the start of Pee Wee Football and playing with bigger and stronger kids it’s Dad that tells him not to worry. Dad knows that Dales strength on the field is his size along with his quickness and agility along with his determination and tells him so.(so how’s he do?) Better read the book

Along the way due to other family matters Dale begins to understand his Father more and more as they talk together about Dad growing up. About what Grandpa was like when Dad was younger.   The book is geared toward the 7 to 12 year old I think mostly Boys but girls could get into it as well.They might like Dales friend Kaylee,tough but with a feminine side.(Mom kinda pushes him into that one)

*Spoiler Alert* the young reader will have to deal with the death of Grandpa. But it  is a nice book filled with life lessons. About Family , Confidence (or lack of) Friendship, self respect and respecting others, and of course what makes Dad tick

Available October 2014 I Know My Dad Loves Me on Amazon

Scott A. Williams is a lifelong late-bloomer whose desire to write fiction is just now coming to fruition. A Dallas native, University of Texas graduate, and former newspaper reporter, Williams describes his fiction as “stories for people who aren’t afraid to feel.” A closeted stand-up comedian, Williams’s greatest accomplishments include “being there” for his children and building a freelance career that has protected him from working at a “real job” since 1994. Williams non-writing talents include avoiding lawn maintenance and juggling better than almost anyone who doesn’t work in a circus. Future goals include putting his two children through college and building his fiction-writing career into a full-time job. Williams now lives in Corpus Christi, Texas.
Bookroomreviews received an advanced copy of this book for a fair and honest review

The War of Words by Amy Neftzger : A Book Review

Disney World or Bust or Get me out of this DEEP FREEZE!!!!