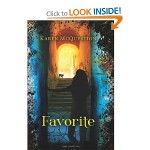 Life isn’t always fair, which seems true for Angie Favorite (whose last name gives rise to all sorts of jokes and analogies), whose mother disappeared on her eleventh birthday and who herself is attacked and almost dragged away when she’s sixteen in a parking lot near a dry-cleaner’s shop. Strangely, because of this attack Angie and her brother Jason are asked to a rich mansion (by the mother of the attacker) when their musician father is away seeking fame and fortune and their grandmother is on a ship cruise with her fiancee, Arthur. And that’s when Angie’s eerie experiences really begin!

Still not fully recovered from the attack, with broken ribs and a hairline skull fracture and a swollen eye, Angie doesn’t want to visit Mrs. Bittner’s mansion, also held back by a discomforting hunch that something isn’t quite right with that situation. But her older brother Jason thinks the rich woman will give them both college scholarships from her foundation and persuades Angie to go with him. Once there, Angie is intrigued by Mrs. Bittner’s grandson Mike, who’s about her own age and takes her out, after dinner, on a pontoon boat and suddenly may have some information for her about her lost mother.

Armed with the likable character of Angie and an excellent ear for dialogue plus a good feel for the social relationships between people, Karen McQuestion creates a very different novel than her first, A Scattered Life, in Favorite – where A Scattered Life is more reined in, Favorite is wilder, and it’s always hard to guess what will happen next between amenities like dinners and casual conversations. Certainly class differences are distinct, although the richer Mrs. Bittner, who should have been happy, isn’t, and Angie and Jason, although still

disconsolate because of their mother’s probable abduction five years ago, are moving forward, working at jobs to secure their educations and their futures. Angie has Misty, her half-Siamese cat, whereas Mrs. Bittner has an inanimate object, a house “built by her grandfather for his fiancee. ‘It’s such a romantic story,’ she said, clasping her hands to her heart. ‘His name was Hubert Walker. He designed it as a castle because he said his intended – her name was Cecelia – was gong to be his queen. He worked with the architect to create the most private home in the state.'” Both families have sustained losses – the Favorites, with the mysterious disappearance of their mother, and the Bittners with the loss of their only daughter to leukemia when she was still a child. And oddly enough, both were named Laura.

Most of all, one believes Angie’s inner voice, which tries to help her through her travails without the nurture that a mother could have given her. Angie seems like a friend to us, a very brave friend who’ll go to great length to help those she loves, and we identify with her and struggle along with her, even when she tries to stave off anxiety attacks caused by her traumas.

Karen McQuestion is an original who teaches herself how to write more incisively (and with even more humor) with each new novel she undertakes. Fresh and spirited, this is a book you won’t easily forget, and you’ll certainly want to share it with all of your friends!

A Trip to the Zoo by C.M. Daniels…teaching kids about money