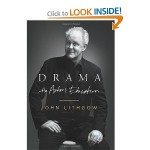 “You’ve had a magnificent career! Look what you created. Look how many lives you changed. You gave so many people their first jobs. You inspired them. You introduced thousands of people to theater. To Shakespeare. Strangers come up and tell me that all the time. You’re my hero. I never would have done any of this if it weren’t for you. I owe you everything. And I’m one of hundreds. Thousands!” Lithgow replies to his father after his father has said, “After all, I didn’t have a career of great achievement.” Lithgow believes that acting is storytelling, and that his father, a Shakespearean actor, inspired him to become one. When his father was 86 years old and post-surgery, Lithgow returned to help care for him and read his parents stories, including one his father had read to him and his siblings when they were children, Uncle Fred Flits By, by P. G. Wodehouse. This gave rise to public solo performances of the story by Lithgow, and the writing of this book, Drama: An Actor’s Education, besides his father’s burst of laughter and an end to his depression.

Beginning onstage as a street urchin at the early age of two in 1947 in The Emperor’s New Clothes, and going on to play one of Nora’s children in Ibsen’s The Doll House, Lithgow shared the stage with his older sister Robin. These plays were produced by Arthur, Lithgow’s father, for the Antioch Area Theatre in the old Yellow Springs Opera House. Arthur loved Shakespeare and produced the Antioch Shakespeare Festival.

About playing the role of Mustard Seed, Lithgow writes: “Standing onstage at age seven in my first scene in A Midsummer Night’s Dream is one of the most potent memories of my childhood” and “I can still picture so many moments of hilarity that I watched from my seat at the Antioch Festival. I see Petruchio waging a food fight, Sir Andrew Aguecheek waggling his sword, Dogberry cavorting with his night watchmen, like so many Keystone Kops. And I see my
father, in one of my favorite of all his roles, staggering around as the drunken butler Stefano in the Tempest. These riotous performances represent my first lessons in the vulgar art of making people laugh.”

Wanting at first to be a visual artist and loving the work of Norman Rockwell, at age eleven Lithgow visited Rockwell’s home to ask for his autograph. At school he became “a cross between Tom Sawyer and a preteen Aubrey Beardsley.” One of his babysitters from those radical times was Coretta, later to become the wife of Martin Luther King, Jr. In 1957 the family moved, as they were to do over and over again through the years, and Lithgow was always
the new kid at

After rejecting a girl everyone called Fat and Ugly (Fau), Lithgow writes, “One of the most basic things an actor must learn is that human beings are capable of anything. Each and every one of us can be noble, courageous, and kind. But we can also be cowardly, cruel and contemptible…. This is one reason why life constantly surprises us. It is also, incidentally, at the heart of the best comedy and the best drama.”

Although admonished by the artist Ben Shahn that going to Harvard would not help make him an artist, Lithgow attended and found himself immersed instead in the theatrical world there. Strangely his major was English History and Literature (with theater arts as extracurricular), and “On the day I graduated, I secretly felt as if I had gotten away with murder.” Timothy S. Mayer cast Lithgow in the part of the central comic role of King Paramour in Utopia, Limited, and deafening applause for a song within it was a “life change” for Lithgow, as “There was no longer any question. I was going to be an actor.”

After marrying Jean Taynton, an actress six years older than he, and playing Abraham Lincoln (appropriately, since Lithgow is six feet four) in a new play called White House Happening by Lincoln Kirstein of the New York City Ballet, Lithgow auditioned for a Fulbright grant to study acting in London. His father was aghast and Lithgow says, “He had always imagined me as a producer-director beholden to nobody and immune to the constant rejection that all actors must endure.” In September 1967 Lithgow was in London, which was abundant with the sensory overload of the Rolling Stones, the Beatles, Carnaby Street, David Hockney, Julie Christie and so many other famous people. He and Jean would go to performances at the Old Vic, including those by Joan Plowright and Anthony Hopkins. He witnessed the power of Laurence Olivier in Strindberg’s Dance of Death. At The London Academy of Music and Dramatic Art he studied Shakespeare under Michael McOwan with other American students. Later Lithgow didn’t act in any Shakespearean plays again until he was 62 and played Malvolio in Twelfth Night.

About acting, Lithgow writes: “We want to be persuaded that we are intensely feeling beings. Why we want, need and love such emotional exercises is a mystery. But one thing is clear: none of us can do without it.” On March 25, 1973, for his role as Kendal in The Changing Room, John Lithgow received that year’s Tony Award for Outstanding Featured Actor in a play.

“At its essence, acting is a gift to an audience, whether that gift is delivered from a stage or a screen.” Replete with early photos and descriptions of both his stage and TV performances and his life travails (including his divorce and happy second marriage to Mary Yeager), Drama: An Actor’s Education is a stunning book, not just about what it’s like to become an actor, but about what it’s like to become a real human being.

Christina Zawadiwsky is Ukrainian-American, born in New York City, has a degree in Fine Arts, and is a poet, artist, journalist and TV producer. She has received a National Endowment for the Arts Award, two Wisconsin Arts Boards Awards, a Co-Ordinating Council of Literary Magazines Writers Award, and an Art Futures Award, among other honors. She was the originator and producer of Where The Waters Meet, a local TV series created to facilitate the voices of artists of all genres in the media, for which she won two national and twenty local awards, including a Commitment to Community Television Award. She is also a contributing editor to the annual Pushcart Prize Anthology, the recipient of an Outstanding Achievement Award from the Wisconsin Library Association, and has published four books of poetry. She
currently reviews movies for , music for , and books for
.