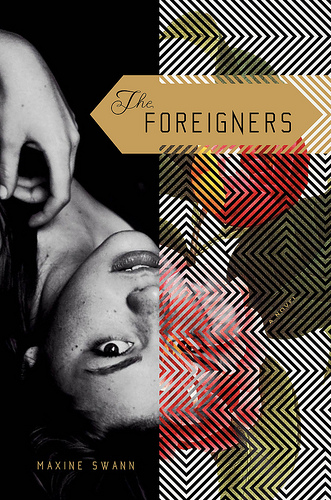 The Foreigners is about a woman, Daisy, trying to escape the break-up of her marriage and the enduring love that she feels for her husband, which is also making her physically ill. Her marriage of nine years dissolves in Seattle and her friend Brian suggests that she take a trip, since sometimes traveling helps this situation, and so he gets her a grant in Urban Studies, studying the public waterworks of Buenos Aires.

“As for me, I arrived in Buenos Aires in 2002 in a peculiar state. I was thirty-five,” Daisy tells us. Tired of the pull of feeling very much in love and emotionally overwrought, Daisy is glad she is there because “Utopia has been defined for many as not what you go toward but what you get away from, Utopia because it’s not the old life. No matter what it offered, Buenos Aires was in that sense Utopia for me.” Daisy rents an older apartment from Olga, a Bolivian real estate agent, “with a chaise lounge covered in worn purple velvet. You felt in your own world, cut off from the rest.” As she begins to explore the city, Daisy tells us that “The city would abruptly change the subject. I had felt this from the start. You were walking along a smooth Palermo street lined with bars and shops and would suddenly stumble into a wasteland, grass and dirt. Or you looked through a doorway into a huge empty hole. It was an unfinished city, but not only that. It seemed interminable, an interminable job. This was also what I liked.”

Daisy meets Gabriel while exploring her apartment building, and he wants to take English courses from her. He understands that she has to get away from “that horrible sense of yearning.” She also meets wild and unruly Leonarda, who is bursting with life and who takes her to a new group called Mercury where people who are trying to start a new society create various alternative projects and clubs. Here she learns “While in the U.S., the concept of democracy comes from the American dream and calls into play such things as self-improvement, each person has the capacity to become better, in Argentina there’s no idea of improvement, you are what you are. What democracy means in Argentina is that every person does what he or she wants.”

Then Daisy meets Isolde, who quit her job at a bank in Austria and first came to Uruguay before landing in Buenos Aires, but Daisy still feels, with Leonarda, “in the presence of a highly developed mind, about 30 times more active than my own, the synapses firing all at once.” With Leonarda, “Rather than ruminating over things, I forgot about my past.” Leonarda and Isolde finally meet, but basically don’t get along, and Daisy continues to go on weird adventures with Leonarda, who meets Mario, a famous writer, and says about him, “I want to control his world.”

Going to a beauty salon, Daisy chats with Nadia, who is originally from the Ukraine and now a hairdresser in Buenos Aires and who had a husband who died of gangrene and cheated on her. Nadia

tells Daisy, “Where there’s a lot of love there’s a lot of suffering.” Then at a party, Daisy meets Diego, who says, “According to quantum physics, you can’t locate an object in space. All you can do is point at a cloud of probable places where it could be. An electron is not in a certain spot, but a little bit smeared everywhere.” Diego also tells Daisy, “We ourselves are like projections into the future, not certainties but waves of possibilities. Beings in a potential state, a little bit everywhere. At any moment we could do this or that.”

Having gone from a state of illness and emotional paralysis after her divorce, Daisy is catapulted into a new land and culture and thus forced into different activities, and she seems to learn that activity of any kind is preferable to desires and love that consume you and keep you from moving forward. Maxine Swann’s writing is a masterful marriage of intelligence and emotion, captivating us in each realm and highlighting the poetry of our lives. She also has a strong understanding of unique and individualized characters, each a mass of contradictions and hope, as we all are also.