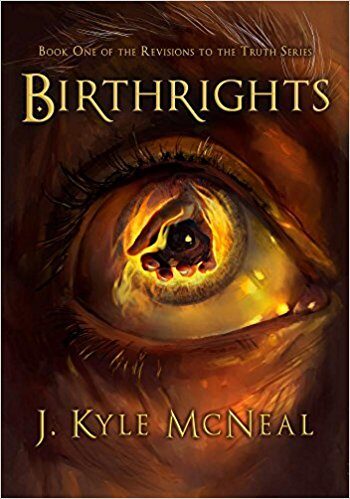 “Birthrights” is a book of fantasy and fiction. Written by J. Kyle McNeal, this book tells the lives of 2 young men, growing up in separate levels of life, but both seeking the same thing – their own identity from their heritages.
Wyam is a grandson of ArWyam who was the leader of the Reform for the Council of Truth, but ended up being beheaded by his friend, Ather 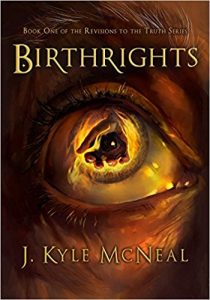 Sandoval. So, with the fall of his grandfather all Wyam has known is life in the slums of RatsNest. In this story you will see that all children, when they reach a certain age, leave their families and are taken on by others to teach them new lives. Some end up in the army, some become apprentices and so forth, it all depends on who seeks out to take the child. Wyam is only 16, and he has prepared himself to go into the army, but bounty-hunter/hit-man, Stern Sandoval chooses Wyam to be his apprentice. This is a slap in the face to Wyam, since this is the son of the man who killed his grandfather. Wyam decides to go, learn the trade, and as soon as possible get away and make a new life for himself. Things don’t go as Wyam ever plans. Stern has Wyam train with another seeker – Kutan. Wyam’s life is soon full of betrayal, dealing with death, heart-ache and more.
” Birthrights” is also about another young man who is also in search of his true way of life. Quint is raised by a highly religious father. But this is not the life Quint wants so, he abandons this faith he has always known, to fight against a corrupt council.
This story contains some violent scenes, rape and brutality, making it not really meant for young readers.
There is betrayal and twist and turns. Both these young men must trust their own instincts to overcome and they have to choose which way is right, although right can lead to death.
I really liked this book. It had some situations that made me sad, mad and sick at my stomach, but it is the way of this type of fantasy fiction. Without it the story would not be good. This book never leaves you bored, and it is hard to put down because of the lives of these 2 young men and others. Lives are constantly changing.
I felt compelled to help Wyam seek a life that kept him from being another RatMan and to push Quint along to become who he really was, not who he was intended to be. This book definitely pulled me in. If you are interested in books where mythical creatures exist and bad men are sought after to be beheaded, then this is your book. I really liked it and recommend it to others. It is actually part 1 of a 4 part series. Just be prepared –there are no little ponies and rainbows in this book.
J.Kyle McNeal is a brilliant author with tons of imagination. It is definitely a great read!

The Spellbook of Katrina Van Tassel