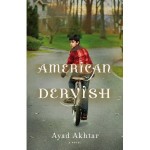 American Dervish is a very powerful and engaging novel that proves a single act can have an influence over the lives of many people. This is the story of Hayat, whose Aunt Mina comes to live with his family in America (in Milwaukee, Wisconsin) when she flees with her son Imran from her Pakistani husband. Mina, who is magnetic and enthusiastic, introduces Hayat to the study of the Quran and to a life of spirituality.

Muneer, Hayat’s mother, welcomes Mina’s presence in her home and is glad that she is far away from her ex-husband and the disdain of Mina’s mother-in-law. Mina’s own father had broken her nose for finding a note from a boyfriend in a textbook when she was 12 and later sold her books, thinking them the cause of her “rebelliousness.” Muneer, dismayed with Naveed’s (Hayat’s father’s) unfaithfulness, becomes happy when his white girlfriend sets fire to Naveed’s Mercedes, because now she’d have more sway to bring her childhood friend Mina to America. Muneer tells Hayat that the secret of a happy life is respect, “Respect for yourself and respect for others.”

Mina infuses Hayat’s life with happiness and tells the children vivid stories of Djinns of fire “tall as trees”
and “others dressed in black robes with bells for hands.” She also teaches Hayat that Allah is merciful and benevolent and “He will always forgive you, no matter what you do.” She talks about the Prophet Muhammed who was given the Quran by the Angel Gabriel, and she wraps Hayat’s head and gives him a copy of the Quran and tells him, “I have a feeling you might just end up a hafiz

someday.” (A hafiz is a holy man who has memorized the Quran.) Mina shows Hayat how to listen to his breath and to think of Allah as near, because “If you think of him as near, that’s where you will find him.”

Hayat, in the sixth grade, suddenly feels that milk tastes wonderful, and he notices the splendor of the sun. But unexpectedly Hayat sees something he shouldn’t, and after that Mina becomes colder towards him and “I knew now I could lose her love. And I was prepared to make sure that it never happened again.” Hayat eventually wins back Mina’s trust but Muneer plots a romance for Mina (which fails miserably), and in wanting to keep Mina, Hayat does something that changes Mina’s life forever. Mina then ends up in a new unhappy marriage where she is beaten and abused by an overly-jealous Muslim. Yet throughout it all she maintains her faith while Hayat ends up losing his.

Ayad Akhtar has created a world of words in which we learn about “real” Muslims who are as pure and as corrupt as all the rest of the religions and races. He paints portraits of individuals with whom we can identify and guides us through the bending turns of the river of life where change is inevitable.

American Dervish is a very important book in this age of “inhuman” terrorists that we fear will hurt us, because Ayad Akhtar shows us how, through the growing pains of one boy’s life, we are all the same.

An American Dervish, a novel by Ayad Akhtar with forthcoming publication by Little, Brown and Company on January 9, 2012, 368 pages.