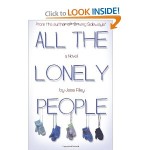 Protagonist Jaime’s account of alienation with her brother Clint and sister Gwen and experiences with her husband Erik and female friends feels much like adult life for many educated American females (this novel being set in Madison, Wisconsin). The recent death of Jaime’s mother grieves her terribly and when her angry brother Clint throws her out of his family’s home during Thanksgiving dinner, she feels even more bereft.

Shopping with her old college friends Frankie, Liz and Amy (whom she rarely sees during the year), Jaime muses that “Every new child, every new job, every new restaurant tried or vacation taken with other people is one less shared experience. I feel a small nibble of jealousy when any of them mention other friends they now go to yoga or lunch or the beach with. But all of this is normal, and it’s to be expected,” whereas her new friends in Madison are “people to gossip with about local politics and horrible students over two-for-one appetizers. We keep things on the surface. Easy. Clean and professional. They aren’t really people to call for support when your mother dies and your surviving family implodes.”

So Jaime decides to place an ad on Craigslist asking people without family connections to meet with her for the holidays. Of the twenty-six replies that she immediately receives, four intrigue her, and she eventually gets around to telling her husband Erik, who can’t believe she is serious. Jaime’s plan is “to actually form my very own new family of kindred spirits,” with which Erik disagrees. But Erik eventually tells her “I still don’t understand this. But I love you, and if this helps you get through whatever it is you’re going through, I guess I’ll support it.”

So Jaime’s four new potential “family members” – Chris, Evelyn, Paul and Alyssa – all different types and ages – respond and agree to meet with her and Erik at Two Dog Cafe for Christmas dinner (and Jaime deletes her ad on Craigslist). Jaime decides that “what a coup I’ve pulled in bringing such a motley band of people together,” but then something unexpected happens in this story of many surprises.

Jaime is open to the world and encounters with new people and so are her new friends, whatever that may entail. “We are completely aware that we are embarking on a strange, grand experiment. We are making it up as we go along. We are rafting Niagra Gorge without life vests, rock climbing without harnesses, eating pork that’s still pink in the middle. All of which, strangely enough, feels the farthest from Death I’ve been in a long time.”

Erik has his problems too, with his father at the Pheasant Ridge Assisted Living Facility, where Frank “has trouble remembering so many words that we have no idea what he’s trying to tell us.” Erik also “loves me a little more than I love him,” Jaime knows. They’ve had trouble conceiving a child together, and Jaime’s biological clock is running out-of-time at age thirty-eight. Jaime comments that “Sometimes I think of our marriage like this: Erik and I are in a rowboat, but I’m the only one paddling, so we go nowhere.”

As Jaime amazingly goes on to be involved in her four new friends’ lives as the year progresses, she recalls memories of her mother and re-assesses her relationship with Erik. She writes about winter in Wisconsin, “my least favorite time of the year.” She likes her new “family” because “….I felt like a broken shard from a smashed vase, and I only wanted to spend time with the other broken pieces because maybe we could glue ourselves together and hold water again.” What happens to Alyssa, Paul, Evelyn and Chris happens to Jaime too as she helps them with their various crises.

Jaime also decides (about her brother and sister) that “Many things can happen in a family – fear, grudges, jealousy, secrets. But many things can also rebuild it. Forgiveness. Hope. Laughter. Love.”

Jess Riley has written sensitively and with great wit about life expectations and the true nature of families, abandonment, loss, grieving, present social conditions and trying to start a new chapter in one’s life while holding on to what’s valuable from the past. Read All The Lonely People and feel like you’re listening to an old and true friend who has many emotions similar to your own.

Christina Zawadiwsky is Ukrainian-American, born in New York City, has a degree in Fine Arts, and is a poet, artist, journalist, critic and TV producer. She has received a National Endowment For The Arts award, two Wisconsin Arts Board awards, a Co-Ordinating Council Of Literary Magazines Award, and an Art Futures Award, among other honors. She was the originator and producer of Where The Waters Meet, a local TV series created to facilitate the voices of artists of all genres in the media, for which she won two national and twenty local awards, including a Commitment To Community Television Award. She is also a contributing editor to the annual Pushcart Prize Anthology (and has received

one herself), the recipient of an Outstanding Achievement Award from the Wisconsin Library Association, and has published many books of poetry and has had poetry and fiction in hundreds of literary periodicals. She has reviewed music for Music Room Reviews, films for Movie Room Reviews, Movie Scribes, and FilmSay, and is currently reviewing books and films online for Book Room Reviews at www.bookroomreviews.com while also showing artwork professionally.

The Spellbook of Katrina Van Tassel